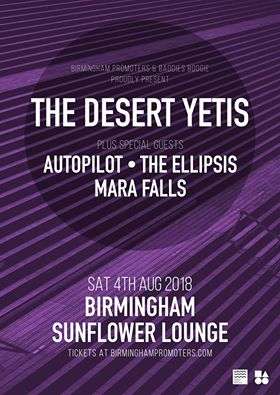 The Desert Yetis have arrived. The Coventry four piece masterfully blend the raw, unhinged grit of Queens of the Stone Age with Arctic Monkeys' knack for sharp songwriting. Having already showcased their dark, melodic desert rock at unmissable shows in packed out venues around the West Midlands, they are gearing up to release their first single in August.

AutoPilot - UK is a three-piece Indie band based in the Midlands. They have created a unique sound, blending rock guitars with big synth hooks to create huge choruses full of energy and melody. Blood sweat and beers go into all of our live performances and we’ve moved under one roof. Got no fans but our parents think we’re decent.

The Ellipsis have already had tracks played on BBC Radio 1 and on Kerrang Radio as well as getting support from hundreds of other stations across the UK and around the world.

"These guys are the real deal you're going to see so much more of them…I started thinking they were good for a Coventry band but now I think they could be quite simply great in terms of the UK as a whole." Guitar Quarterly Magazine

"Henry Bristow is a bundle of energy with his clear distinctive vocals, actually he is a perfect front man." Pete Chambers BEM, Coventry Observer

Mara Falls represents a journey, a vehicle to liberation, a joyride with the breaks cut.

Mara Falls burst on the scene in 2017, releasing 'Getaway' and 'One for the Road'. Immediately championed by the likes of BBC Introducing, Amazing Radio and TouchFM, Mara Falls took their frenetic live show to stages across the UK. With highlights including O2 Academy Islington Headline show and supporting Magic Wands.

‘Mara Falls are the obsidian in the rough.’

‘With festival-worthy choruses and monopolising beats, Mara Falls electric live show emanates a sexuality that can only be backed up by the members’ visual aesthetic.’